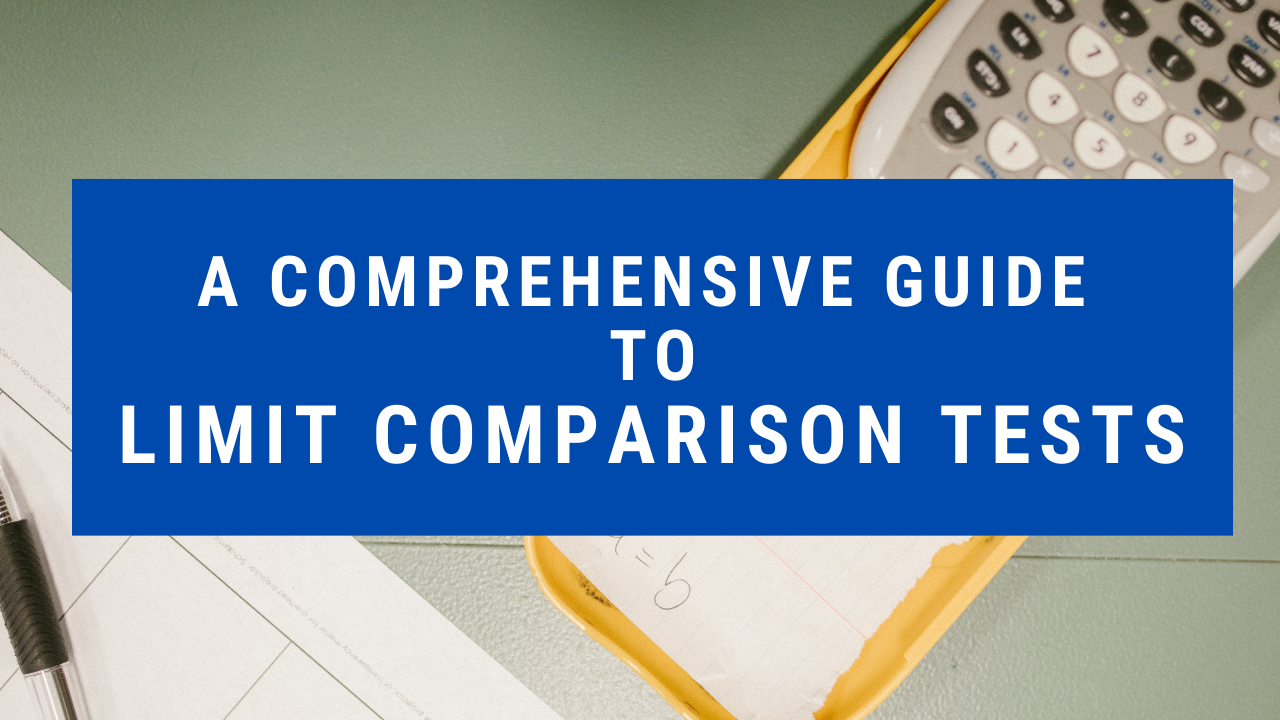 The direct comparison test compares the terms in the series on an individual basis. On the other hand, the integral test determines the convergence (or divergence) of a series by comparing it to a related improper integral.

While very useful and relatively easy to apply, it can be challenging to understand when to use the convergence test and how to use it effectively.

In this guide, we take you through the heuristics and subtleties of the limit comparison test to help you use it without a struggle.

is an infinite series, where ɑn is zero or a positive number. Let’s also assume that there’s a positive sequence bn that is also positive or zero.

Now that you know the statement, it is important to understand the subtleties of cases 2 and 3 above.

Let’s assume that you pick a series

to compare with, and you know that the series diverges. Now, if you compute that

. But since you know that

diverges, computing the value doesn’t help you conclude anything.

In the same way, if you pick a series

to compare with, and you know that it converges. If you compute that

. By the same token, since you know that

converges, computing the value doesn’t help you conclude anything.

When to Use LCT

There are three primary scenarios you can apply the limit comparison test in. There’s a fourth, broad scenario where the LCT can be helpful too.

The LCT is the most useful and most straightforward method to isolate the dominant behavior in a series. If a series has dominant terms that are apparent when you first look at the series, it is possible to generate a bn to compare the series with, by isolating the series’ dominant behavior.

Here’s an example to explain this:

At first glance, there’s a lot you can ignore in the series. There are three terms in the numerator. The first term, n2, is the most important term because n grows to infinity in this series. The second term, 1, cannot grow. And finally, the third term sin n bounces between the interval of -1 and 1 depending on the value of n.

Since sin n is very different from sin (1/n), we are not in case 3 mentioned in the statement of LCT.

Now, looking at the denominator, you will find three terms under the square root. Since there is a √n7, the dominant behavior in the denominator comes from √n7.

Knowing all of this, intuitively, we can work this expression down:

is convergent, and therefore, we can intuitively say that

We can formalize this idea using the limit comparison test:

One is finite and positive, meeting the criteria of case 1. This means that the series

When there are logarithms in a series, they introduce some subtleties and challenges in limit comparison.

What you need to remember is this:

You can infer from these notes that the growth of a logarithm in a series can be absorbed with a small power of n.

More specifically, you can infer that if a series has a logarithm that cannot be ignored, you can create a series to compare it with by replacing ln ln n with a small power of n.

When you do this, the logarithmic growth in the series is gone. The LCT will likely be in case 2 or case 3 of the statement.

Here’s an example to explain this:

In this example, the denominator grows at the rate of n2. But what’s more interesting is that the numerator grows slower than n2.

If you look at the criteria of case 3 in the statement, we can only make a conclusion if the series in the denominator diverges. But

and doesn’t reveal that the series is divergent.

We will need to consider a small amount of growth to absorb the logarithm. So, we can use the heuristic:

If we use the heuristic instead of ln ln n in the expression, we get:

Now that we’ve gotten a limit of zero from the test, and know for a fact that

converges, we can apply case 2 from the statement and conclude that

Let’s consider the graph of a regular sine function.

When you plot the y = sin(x) graph, you will find that the tangent line at x=0 is y=x. The reasoning behind this is simple: sin(0) is equal to zero, and cos(0) is equal to one.

Using the Meta-Calculator graphing calculator, we’ve plotted the intersection of both equations on the graph. 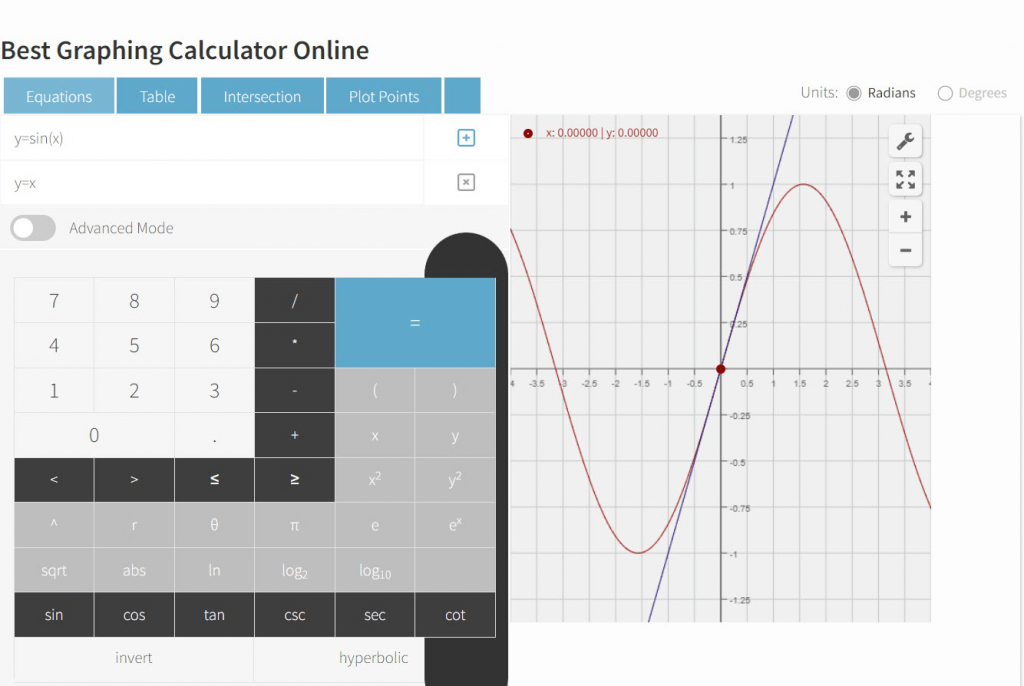 The graph makes it clear that sin(x) is approximately equal to x when x is close to 0. Additionally, the fraction

has a value close to 0 for large values of n.

This proves that sin sin

.  We can exploit this property of the sine function to create useful comparison candidates for the LCT.

Considering the proof above, we can intuitively find that:

We can formalize this idea by using the LCT.

Now, since one is a positive and finite number, we find ourselves in case 1 of the LCT statement. In other words, the series

have the same behavior. Since the latter converges, according to the statement, we can be sure that the former also converges.

Many other approximations can prove useful in generating series for comparison. Some of them include:

What you must bear in mind is that sin sin x ≈ x only when x is small. For the approximations to hold, the value in the sine function must tend to 0. For this reason, we cannot make assumptions like sin sin n ≈ n.

Applying the knowledge we have of Taylor polynomials generally allows us to capture the behavior of other sequences.

For instance, the degree 2 Taylor polynomial for cos(x) at 0 is:

In other words, when x is near 0, we can approximate:

The general behavior can be identified as:

After arriving at this result, we can use the LCT to verify that

has the same behavior that

does, and therefore, the series converges.

In other words, we can expect ex≈1 + x when x is near 0. With this approximation, we can make sequential approximations such as:

There are scenarios that you cannot identify with any of the above cases. In such scenarios, you can choose to run an LCT against

It’s important to note that this doesn’t always work. But a lot of times, it can give you the answer.

There are two scenarios where you can apply this method and be sure that it’ll work:

is the biggest infinite series that is convergent. In other words, it converges, but very slowly.

On the other hand,

is among the smallest divergent series – it diverges, but very slowly.

is bigger than the majority of other convergent series, which makes it a good candidate for convergent comparison. Likewise,

is a good candidate for divergent comparison.

You don’t always need to have a scientific calculator at hand to calculate limits. You can use the Meta-Calculator limit calculator to work out the limits of functions.

It is accessible from any device with an internet connection. Further, it is completely free to use, making it one of the handiest limit calculators you’ll come across.

Besides being easy to use and passing you results instantly, it supports finding a limit as x with any number – including infinity.

Meta-Calculator also offers a graphing tool, as you may have seen in the case 3 section earlier. Getting a visual understanding of a function is as simple as entering the function in the tool. You can also enter two functions and have Meta-Calculator draw an intersection between the graphs.

To find the limit of any function using the Meta-Calculator Limit Calculator:

In addition to trigonometric functions, you can work with hyperbolic functions, arc functions, logarithms, and square roots. Meta-Calculator offers several functions to work out limits on the go or at your computer, as long as you’re connected to the internet.

Functions such as abs(x) and floor(x) are also available. With these, you can feed any function you need to find the limit on Meta-Calculator easily.